When in March 2020 Italy – followed by the rest of Europe – entered the first lockdown to contain the spread of the Sars-Cov-2 virus, it immediately became clear that the recent pandemic would have given rise to one of the most serious economic crises since the second post-war period. For this reason, many demographers raised the question of a probable drop in births, as a result of the economic crisis at least in developed countries.

This expectation is well-grounded in the literature: past economic recessions have been always associated with a downward revision of the short-term fertility intentions, with a consequent reduction in the number of births during and right after the crisis. Childbirth decline in that periods is due to the great loss of jobs and the related economic difficulties and uncertainties: under these circumstances, having a child is perceived as an unsustainable financial investment.

To explore how and whether the Covid-19 crisis would impact the fertility plans of young people in Europe, the Istituto Toniolo has developed a special module of the Rapporto Giovani survey, which has been carried out in March 2020 by researchers of Università Cattolica in collaboration with IPSOS and Istituto Toniolo, on a representative sample of the young population (18-34 years olds) in Italy, France, Germany, Spain and the UK. The first results of this research already appeared in scientific journals and reports, gaining a wide appeal because they provide some confirmations to the demographers’ concerns about a possible baby-bust. Even though the effect of the recession on the actual births will be evident only from 2021, preliminary signs of the effect of the pandemic on fertility can be found in the individuals’ confirmation or revision of their original fertility plans for the 2020 because of the economic crisis.

Overall, the study considers the pandemic impact on many important life projects of young individuals, such as the decision to go and live outside their family of origin, starting a cohabitation with a partner or getting married, conceiving a child, looking for a job, and changing home/city/country. Although it could be expected that many desired plans would have to be revised because of the pandemic, however there is a wide discrepancy between European countries in terms of the proportion of young people perceiving their plans as at risk. In general, the impact of the pandemic on these projects is negative: however, the life plans of young Italians and Spaniards are more vulnerable than those of their European peers. In March, 62% of the Italian respondents and 59% of the Spaniards, in fact, believed that the health emergency would have had a negative impact on their plans.

French and German young people seemed less concerned, with 46% and 42% of the respondents recognising this risk. In Great Britain, 54% of young people were concerned about the negative effects of the crisis on their life plans.

Among all the projects, the decision of conceiving a child is one of the most negatively affected (Figure 1). Most of the people who were planning to conceive a child in 2020, before the pandemic occurrence, have changed their mind: in France, Spain, Germany and the UK, more than 50% of them decided to postpone their plan. In Italy the proportion of postponers is lower (about 38%) but the relative amount of those who – at least temporarily – quitted the program nearly achieved the 37%. Only Spain shows a proportion of abandoners (those who quitted the plan) close to the 30%; all the other countries are below the 20%, with Germany around the 14%. Thus, while this picture should be alarming for all countries, it may be particularly worrying for Italy.

Figure 1. Confirmed or revised intentions of conceiving a child in the 2020 (%), among those who declared in January 2020 they were planning a pregnancy within the following 12 months (Source: Rapporto Giovani, March 2020). 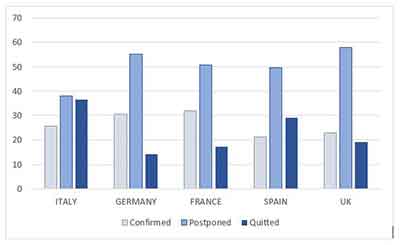 Among the possible drivers of the decision to revise the childbearing plans, the perceived risk of losing income and job – due to the Covid-19 crisis – appears as one of the strongest. In other words, especially in Italy, Spain and the UK, when an individual expects a reduction in his/her income as a consequence of the pandemic, this is associated with a higher probability of quitting the plan of having a child in the 2020. Similarly, the job insecurity resulting from the crisis seems to have increased the probability of abandoning the plan to have a child in 2020 in all countries except Germany.

In order to understand how much the very first impact of the health crisis on fertility intentions might have changed over time – e.g. thanks to a better knowledge of the actual effect of the pandemic on the occupational and financial situation, or to an adaptation to the emergency – a second round of the survey has been carried out in Italy in October 2020. Preliminary results confirm the persistence of a high proportion of respondents who were still indefinitely suspending the plan of having a child. This reinforces the expectation of a drop in fertility in Italy for the 2021.

To date, in the European context, Italy remains one of the most affected countries by the pandemic. However, the lower propensity to have children – on average – in Italy, if compared with other European countries, is a long-standing characteristic. So far, in 2018 Italy – together with Spain – was already the country with the lowest fertility rate in Europe (1.29, compared, for example, to 1.88 in France and 1.57 in Germany). Among the causes, there are a poorly functioning youth labour market (which shows the highest proportion of young people not working and not studying in Europe), the underemployment of female workforce, the scarce provision of childcare services and, in general, an inadequate welfare state support to work-family reconciliation and income protection. Therefore, job and income uncertainty due to the Covid-19 recession add themselves to this pre-pandemic scenario in reducing the chances of starting an own family for the young generations.

Low fertility is worrying because it implies a rapid process of population ageing and a progressive reduction in the available workforce, which undermines the sustainability of the welfare state but also the economic performance of the country. Therefore, a further contraction of fertility in Italy would worsen an already compromised demographical situation: for this reason, effective policies to contrast the disrupting effect of the Covid-19 crisis on the young generations’ family plans should be promptly implemented. 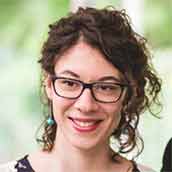