According to Almadiploma (2021), around 40% of Italian high school students, who graduated in 2019, would have changed their school choice. This phenomenon is higher in students attending “IT”, technical schools (40,6%) compared to those attending “Liceo”, high schools with theoretic topics (35.9%). The percentage is huge and alarming, considering its effects on school satisfaction, academic tenure, professional both competencies and motivations in the following career. Boston Consulting Group (2020) confirms the existence of these effects: according to its study, 10 million Italian workers are “badly matched”, and Italy is collocated at the 34th position for skill mismatch on a list of 75 countries all over the world.

To better understand this phenomenon, and discover if this criticality appears already at the beginning of the academic path, Diego Boerchi of the Department of Psychology of the Università Cattolica del Sacro Cuore, in collaboration with Paola Magnano (Università degli studi Kore di Enna) and Ernesto Lodi (Università degli studi di Sassari), has conducted a pilot study with the collaboration of the Istituto di Istruzione Superiore Luigi Galvani in Milan (Italy).

211 students, attending the first year of Liceo (46,5%) and IT (53.4%), participated in the study. They replied to an online questionnaire administered in April 2019 in the computer classroom of their school. It was composed of two scales. H-Comp Scale (Boerchi, Magnano, & Lodi, in press) measures the following non-intellective competencies which can explain more than 40% of the variance of academic performance: Study-area (Intrinsic Motivation, Extrinsic Motivation, Time Management, Study Dedication), Self-area (Learning Assessment, General Self-Esteem, Self-Efficacy, Reaction to Failures, Emotional Control), and Relationships-area (Family Relationships, Fellow Student Relationships, Teacher Relationships). H-Sat Scale (Lodi, Boerchi, Magnano, & Patrizi, 2019) measures academic satisfaction in the following five areas: appropriateness of Choice, quality of school Services, Relationships with classmates, the effectiveness of Study habits, and usefulness for a future Career.

A cluster analysis, applied to the data gathered with the H-Comp scale, suggested distributing the students in four different groups, described in Graphic 1.
1) Students able to manage the learning, on a scale between 0 to 10, have an academic performance around 8 and feel to possess good no-intellective competencies, except for emotional control during tests which is the only no optimal one.
2) Students with difficulty managing the learning have to engage more in the study to achieve a performance of 6.5 and feel to possess just acceptable no-intellective competencies.
3) Students who are satisfied with sufficiency tend to engage in the study as much as necessary to reach a performance of 6 at the end of the year and feel to possess good no-intellective competencies just in the Self Area.
4) Students resigned to failure have bad academic performances and feel unable to face the study in the school they are attending.
Graphic 1. Clusters’ features 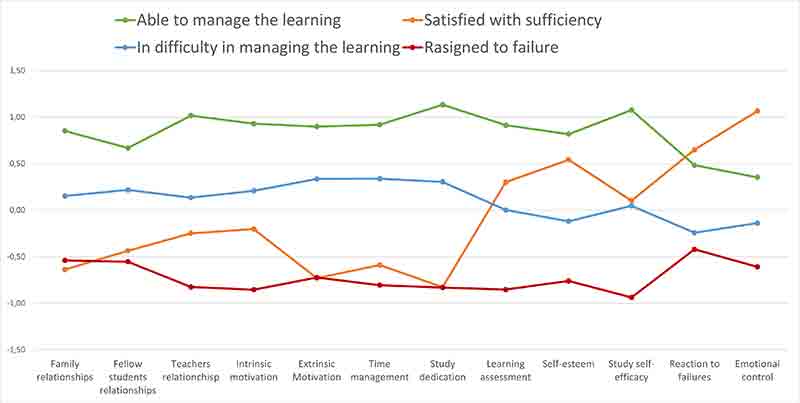 An interesting result of the study is the estimates of the percentage of students assigned to the four clusters and compares IT and Liceo. As shown in Graphic 2, at the end of the first year of school, 1/3 of the students felt in great difficulties, and just 32% in Liceo and even 16% in IT felt congruent with the school they had chosen. A moderate percentage felt good with reaching the sufficiency, and a significant percentage had to engage a lot in the study to reach acceptable performance.

Graphic 2. Students’ distribution in the clusters 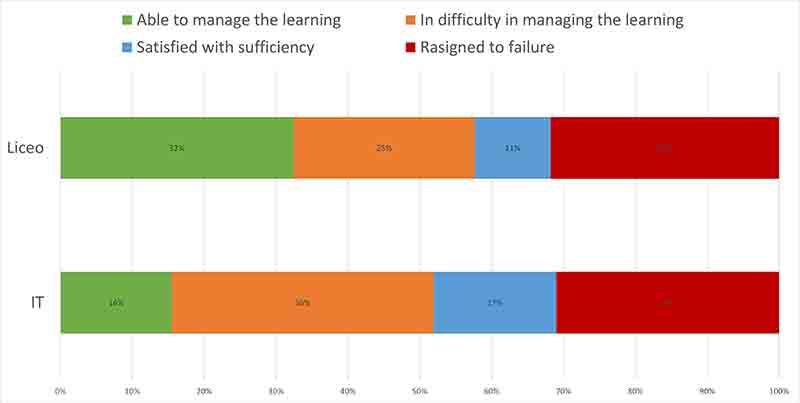 Finally, as was easily predictable, students assigned to the clusters were differently satisfied with their academic experience. As shown by Graphic 3, the four clusters differentiate mainly for the effectiveness of study habits, followed by the appropriateness of the school choice and its usefulness for a future career. This helps to explain the main reasons for the unsatisfactory experience of many of the students. It is very likely that they have chosen their school without the necessary skills in career choices and with an inadeguate support to consider in advance both the topics covered at school and their no-intellective competencies.

Graphic 3. Levels of academic satisfaction in the different clusters 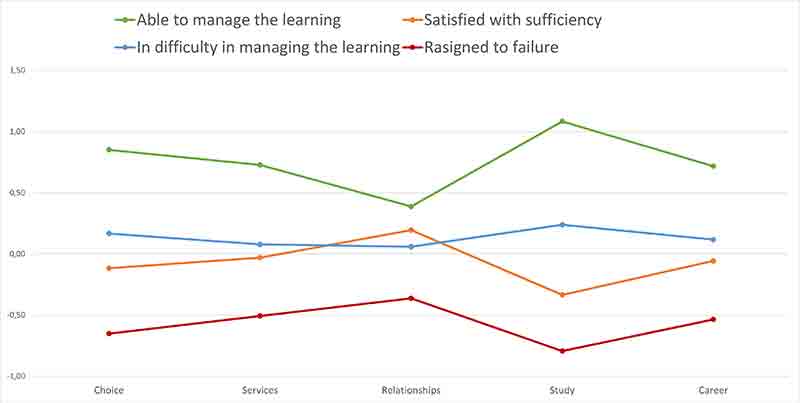 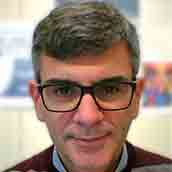