Our homes are increasingly populated with Internet-connected devices (IoTs) ‒ ranging from smart TVs to smart speakers, connected appliances, smart watches, smart video doorbells, etc. ‒ which turn the domestic space into a datafied environment. This ecosystems of internet-connected digital artefacts (IoTs) collects and distributes data about the household (e.g., the patterns of energy consumption) and its members, including children.

The youngest family members, therefore, are likely to interact with, and be monitored by the smart devices present at home. Moreover, new internet-connected toys (IoToys) are in fact starting to enter children's everyday play practices, including talking dolls, robots and pets, smart watches and interactive building blocks, as well as digital platforms or apps operating on computers and tablets. As a consequence, children become both subjects and objects of data generation and collection, by engaging directly with digital media, or because parents and other family members generate data about them.

The preliminary findings of the DataChildFutures project ‒ which investigates parents’ and children’s (aged 0-8) practices with digital media, together with parents’ imaginaries about data and privacy ‒ demonstrate the diffusion of IoTs and IoToys among Italian families, and the increasing normalisation of data practices in the context of everyday, domestic life. 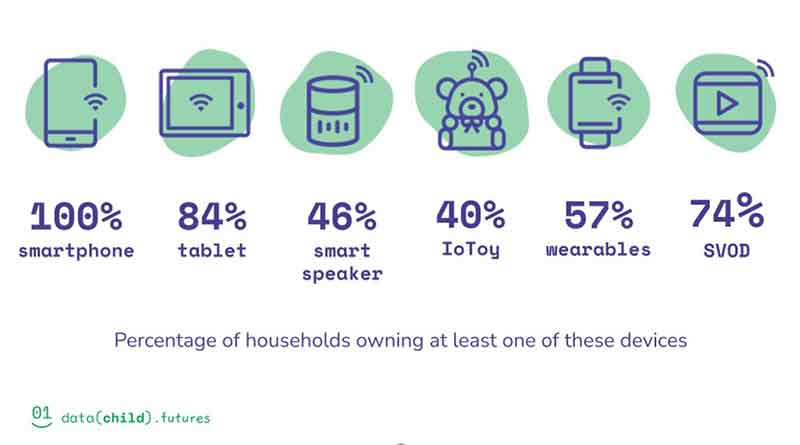 Figure 1 shows details on the ownership of digital media and IoTs among Italian families. Specifically, all the participating families own at least one smartphone; 84 percent at least one tablet; 46 percent own at least one smart speaker; 40 percent own IoToys; 57 percent own wearable devices; 85 per cent have a smart TV and 74 percent have a subscription to on-demand platforms; finally, 71 percent of families have at least one videogaming platform. Taken together, these figures show that Italian families have incorporated a range of smart objects in their everyday (entertainment, education and sociality) practices, and their technological culture.
We have asked parents whether children use the smart devices independently or, alternatively, under parental supervision. 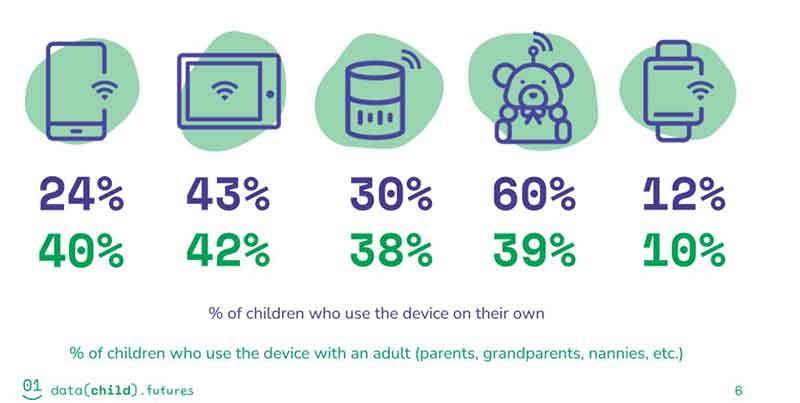 Figure 2. Percentage of children that use devices on their own and with adults

In this respect, Figure 2 shows that children use devices with varying degrees of autonomy, in particular: among children who have access to a smartphone, only 24% of children use smartphones on their own, while 40% are accompanied by adults (such as parents, grandparents, nannies and other relatives). Similarly, while only 26% of children use smart TVs and on-demand platforms on their own, most children (68%) have access to these technologies under parental supervision. When a tablet is available at home, 43% of the children use it alone, and an equal number of children use them with adults. Similarly, smart speakers and wearable devices (such as smartwatches) do not show large discrepancies between self and mediated use. Smart toys show more autonomous use, as about two thirds of children (60%) use them alone compared to those accompanied by adults (39%). Overall, the data show that children are fully integrated into the domestic data practices, engaging in autonomous use even of devices that were not specifically intended for them.

Among all devices, smart speakers deserve an in-depth examination as the children’s data they collect – conversational and sound data – are among the most sensitive.
Italian families use smart speakers many times a day for various reasons, among which listening to music, searching for information and being reminded of appointments and deadlines are the most frequent. Family members also make use of smart speakers to keep up with the news, communicate with others and control other devices and appliances. Alongside the traditional uses of smart speakers, a surprising result shows that 43% of smart speaker owners use them to tell bedtime stories to their children every day. Such a result shows that smart speakers have been so deeply integrated into the home that they are accepted also within practices of care traditionally dispensed by parents.

Observing how Italian families interact with smart speakers, then, does not merely provide an overview of usage practices, but opens a window into the relationship between families and privacy. In this respect, our study shows that Italian families, faced with the opportunity to access a more customised service, would be willing to give more personal information in return.
Connectivity transforms devices into media, that is, artefacts that mediate even the most banal and intimate aspects of family life, and narrow the differences between private and public spheres, precisely because they can be shared. In order to work, in fact, the devices must aggregate data on the home environment, specifically on how family members, including children, use them. The manufacturers of these devices, such as Amazon and Google, promise that this data will be processed anonymously. However, recent cases, such as a lawsuit raised against Amazon in 2019, have shown otherwise. As a result, the progressive popularity of connected devices is coupled with increasing concerns over user privacy, particularly with respect to the role of companies in charge of handling aggregate data.

Similar concerns arise for an additional practice based on data sharing which thus raises security and privacy issues, namely sharenting. Having become a habit among parents, especially mothers, sharenting involves parents creating digital footprints for their children by sharing family photographs and videos on social media. Looking at sharenting on platforms where only friends and family have access – WhatsApp is the most popular – our data reveal that sharing intensifies during the early years, when children are younger, and decreases as children get older. Instead, sharenting is less frequent on the most popular public platforms – such as Facebook and Instagram – but it involves slightly older children.

What are the implications of self-aware and unaware data sharing in the home environment, as well as on online platforms through sharenting? Our results show that parents are more concerned about state surveillance and identity fraud than the risks of surveillance capitalism. In contrast, they are less concerned about the consequences of classification and sorting by algorithms, such as differential access to resources. The results also show that this concern increases with parents’ level of education.

These questions are part of our research project, DataChildFutures, funded by Fondazione Cariplo under the Ricerca Sociale 2019 framework and coordinated by Giovanna Mascheroni for the upcoming 3 years. Focusing on the datafication of childhood – that is, how the production, dissemination and consumption of data intertwine with citizens’ and families’ practices – the project combines different methods: a questionnaire among parents of children aged 0-8; a longitudinal qualitative research with young children and their families; an ethnography of online platforms for parents; finally, an affordance analysis of apps and devices used by children.
You can follow the project here: datachildfutures.it.