A century of the future. Università Cattolica is celebrating its 100th anniversary by betting on the new generations and on "a Europe at the service of young people". Pope Francis' video message, Rector Franco Anelli's inaugural speech and the speech by the President of the European Commission Ursula von der Leyen ‒ during the inauguration of the 2021-2022 academic year, held in the Aula Magna on Sunday 19 December ‒ are united by a great openness to hope.

The first to point this out was the Holy Father who, proposing a "mystique" of Università Cattolica around the words "fire", "hope" and "service", told the students: "In these confused times, made even more complex by the pandemic, I repeat: do not let hope be stolen from you! Do not let your hope be stolen! And don't let yourselves be infected by the virus of individualism. That's ugly, isn't it! And it hurts. The university is the right place to develop antibodies against this virus: the university opens your mind to reality and to diversity; there you can bring your talents into play and make them available to everyone".

President Ursula von der Leyen's speech focused entirely on young people. "A new generation of leaders is being formed within these walls". It is the one "that will shape post-pandemic Italy. That generation is you, the students listening to me today. In a few years’ time you will be young professionals with new ideas and energy. The future is in your hands. The future belongs to the next generation of Europeans". For von der Leyen, "Europe is in good hands".

The President of the European Commission used three words to describe the EU's mission to serve the Next Generation in the coming years and decades: “planet”, “innovation”, “democracy”. For a more sustainable future, the European Green Deal intends to give a concrete response to climate and environmental threats, while promoting economic, digital and green growth. And the new European Bauhaus ‒ in which Università Cattolica is an official partner ‒ is a creative and interdisciplinary initiative inviting citizens to rethink their way of life, combining art, culture, social inclusion, science and technology with European sustainability objectives.

From the younger generation comes the extraordinary Next Generation EU plan which, with an investment package of over EUR 800 billion, will support the restart.

With the European Democracy Action Plan, the Commission wants to implement measures to reinforce a European democratic perspective, promoting free and fair elections, strengthening media freedom and fighting disinformation. "Our mission is to protect and expand our democracy", she said. "The Europe I want must protect people from illegal online content and misinformation by making social media platforms more accountable for the content they host. The Europe I want must protect against hate speech and hate crimes by integrating the list of crimes into our treaties".

.@vonderleyen: «I also want Europe to engage more with you, young persons, listen to what you have to say. What you demand from Europe. And what your dream of Europe is. That’s why I have proposed to make 2022 the European Year of the Youth. We want you to make your voice heard» pic.twitter.com/tYYvM4syvB

A Europe that serves young people must also be able to listen to them. For this reason, the President announced, "I have proposed to declare 2022 the European Year of Young People. Our democracy needs your commitment. So, say your piece, and Europe will listen.

The Rector Franco Anelli emphasised the importance of the new generations. The students "are our part of the Next Generation, we are here for them. They represent the regeneration of the initial motivation. Every year they renew the founding act, the first stone laid one hundred years ago". Starting with the first ones, "who I never tire of counting among the founders of this University", and then "the increasing number of young people who have placed their trust in us and who have allowed the University to contribute to the development of the country with its more than 300,000 graduates".

Rector Anelli: Identity, creativity and new places to go beyond the uncertainty of the present (ITA)

Professor Anelli said: "Today we are crossing a threshold: the second century of this University's life begins". The presence of the President of the Commission brings together the two constituent elements of this University's identity: its national and European dimensions. "Firstly, because it is a University and universities are in themselves the bearers of an intrinsically European culture. The Union itself would not have been conceivable without the common matrix of thought that the universities have helped to create and disseminate; just as our universities today are inconceivable except within the European higher education and research system. Secondly, this University is even more profoundly European precisely because it is Catholic".

Moreover, as Monsignor Mario Delpini, archbishop of Milan, said in his greeting as President of the Toniolo Institute for Advanced Studies, "Università Cattolica has a mission: critical thinking can be joyful if it is discernment leading to amazement; legal culture can offer motivation for the undertaking of fixing the world if it introduces the art of politics and civil coexistence according to justice; economic competence can be a qualification for responsibility for integral ecology. In short, the mission of Università Cattolica is to bear witness to and shape a humanism of hope".

For this reason, Professor Anelli said, "a University like ours must aim to operate as a creative institution. In a period of disorientation, universities appear to be among the few realities whose function has remained virtually intact and pedagogically necessary for the growth of generations".

With them in mind, the Rector announced "an important step towards defining the face of the University of the next century". In recent weeks, the minutes of the handover of the Santa Valeria wing of the Garibaldi Barracks in Piazza Sant'Ambrogio have been signed, and the agreement with the Municipality of Milan and the Agenzia del demanio (State Property Agency) has been finalised, which will allow the renovation work to begin. At long last, after years of intense efforts, an aspiration that had already belonged to our founders has been fulfilled and we are beginning to see on the horizon the possibility of creating a large urban campus in the building that was first a Franciscan convent and then a military barracks and finally housed the State Police; a renewed place of study and culture will thus be returned to the city".

This will become, together with "these historic and irreplaceable cloisters, our new home". An almost elusive dream will become reality. I don't think we can imagine a more significant gesture to mark the beginning of a century".

Rector Anelli closed his speech by referring to the students. "When a professor enters the classroom, he realises that in those faces, different every year but animated by the same expectation of knowledge, the sense of the university institution is recreated, the root of its existence. Looking at the crowded lecture hall and the curious eyes of the students at the beginning of the first lesson of the course, one grasps the prophetic value of Martin Heidegger's expression: "The Beginning is still there. It is not behind us, like an event long past, but is in front of us, in front of us''.

After her speech, President @vonderleyen together with Rector Franco Anelli met the @Unicatt students in Aula Gemelli who thanked her for her words and gave her the #Unicatt Centenary hoodie @europainitalia #Unicatt100 pic.twitter.com/au5cwXl7NF

At the end of the inauguration ceremony, Irene Ferrami, a student graduated in Linguistic Sciences and enrolled in the graduate programme in Languages, brought greetings from a large delegation of students who met President von der Leyen in the Gemelli Aula Magna, giving her a University sweatshirt. "I thank you on behalf of all European youth, because in a dialogue what counts most is to have someone who listens, and your great commitment to help us take care of our planet, to help us take care of our future and to help us not to lose hope is the greatest example of what the European Union is all about. Thank you, from the bottom of Europe's heart". 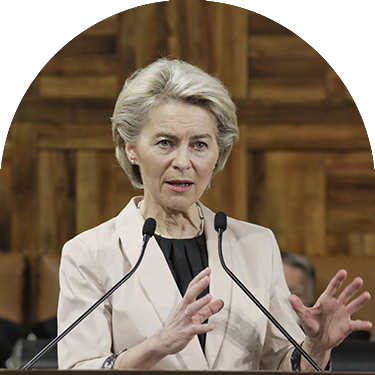 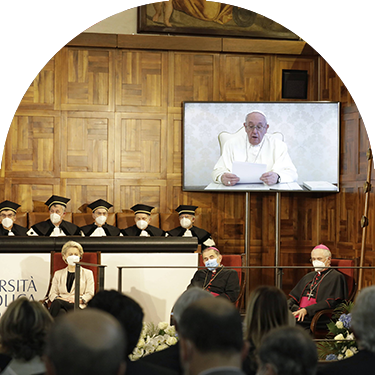